San Vicente could be whopper in 2015 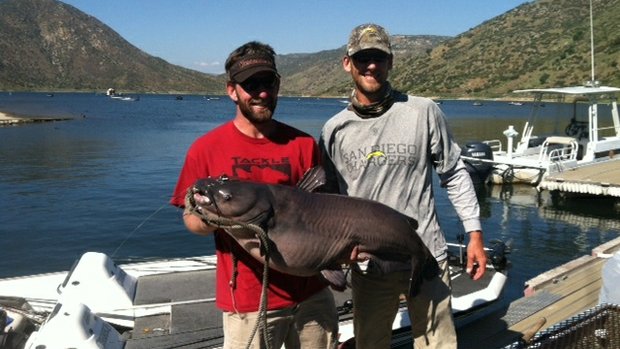 LAKESIDE — Whenever the re-opening of San Vicente Reservoir to fishing and boating is mentioned, one of the oft-heard mantras goes something like this:

“I just hope I’m still alive to fish it.”

Variations of that abound, but the point is, anglers who haven’t fished San Vicente since it closed for construction in 2008 live for one more cast on it. Fishing was that good for big bass and giant blue catfish, even big bluegill.

But there is also this: They know that any fishery that has been closed for over seven years will offer phenomenal fishing when the launch ramp fills with boats.

San Vicente was closed in September 2008 to raise the level of the dam. Its reopener is tentatively set for Nov. 5 this year, but a lot will have to happen.

“A number of factors, really,” said City of San Diego reservoir keeper Larry Rodrigues, who has overseen the project for the city and checks the dam and water readings once a week. “The County Water Authority will take the water down and then bring it back up. But that’s providing there’s water available. The earliest it will open is November if everything falls into place.”

On Monday, the last of the massive acreage of riprap was placed into the giant, deep bay that will surround the launch ramp. It stretches over 900 feet into the gin-clear San Diego drinking water. It’s so long that golf carts will be used to haul older or handicapped anglers to the boat dock at the top of the ramp.

Workers continue to labor, turtle slow, on the parking lot, marina, concession, comfort stations, ranger office building and staging area for boats at the top of the ramp. The area includes an area for picnics and gatherings.

“It’s going to be very exciting here once it’s all done,” Rodrigues said.

Sportsmen who fished it last in August of 2008 won’t recognize the place when they roll up the hill on that special opening day.

Let’s start with the access road, marina and launch ramp, all new.

Remember that drive up the hill, when you sometimes wondered if your truck and trailer were going to make it? Or the scary ride down it? The road has been cut down in slope, newly paved and not nearly as dangerous.

The parking lot, marina and launch ramp will be customer-friendly with plenty of spots for parking, with a concession building, rest rooms and a six-lane launch for getting onto the lake. There will be new landscape, interpretive signs, kiosks, a picnic area with shade and all native plants and trees.

Rodrigues said the recent rains have greened up the hillsides, but have had no impact on the reservoir’s water level. The only water making a difference is the water piped into it.

“Our streams have not flowed,” Rodrigues said, a statement echoed by Lori Felchlin, the city lakes secretary who issues a weekly fishing and hunting report from all the city reservoirs that check in.

“The ground is just soaking up the rain,” Felchlin said.

On a drive up to the dam earlier this week, a mule deer bounded down the construction road. Up in the rocky ledges above, a red-tailed hawk lifted off. And up at the top, a Peregrine falcon soared in displeasure at all the human activity on the dam.

A crew was busy taking core samples of the concrete in the dam, a requirement for safety reasons.

“We had a flock of white pelicans on the lake here this morning,” Rodrigues said. “A couple dozen of them. They’re out here, unmolested.”

“Unmolested” is the state of everything in and around the lake below the construction zone. On a boat ride back in October, Rodrigues pulled his boat into Barona Arm and came up on a school of feeding, leaping largemouth bass. Underneath them, thousands of shad schooled and bolted out of the cove in a steady stream. There were so many shad the schools could only be compared to clouds of anchovies or sardines in the ocean.

All that life drew poachers when it was warmer – and that kept rangers and the California Fish and Wildlife wardens busy. But now that the bass have gone deeper to seek a better thermocline with food and better water, the poaching has slowed.

But at its peak, poachers report it was worth getting the fine.

“They raised the fine, and that seemed to slow it down, too,” Rodrigues said.

San Vicente was the last of San Diego’s reservoir’s to receive Florida-strain largemouth bass when it received them in 1969. Former city lakes supervisor Orville Ball imported the bass as an experiment. When these Florida-California hybrids grew to trophy-sized bass in a short time, many lake managers imported them for their fisheries.

This was before catch-and-release bass fishing, and legendary stringers of bass were landed in the 1970s. The late “Lunker” Bill Murphy forged a national reputation by catching countless bass over 10 pounds at San Vicente. Former state and city lakes fisheries biologist Larry Bottroff predicted San Vicente one day would turn out a bass that would topple the world record of 22-pounds, 4-ounces.

The record never was toppled here, but former bass pro Bobby Sandberg caught an 18-pound, 9-ouncer so early on that the real question now is will San Vicente, after all that rest, be revived and kick out some 20-pounders?

Rodrigues said he’s not sure how the city will handle the logistics for the re-opener. He said city lakes program manager Joe Weber is thinking of going to reservations early.

“It depends on the time of year we open,” Rodrigues said. “If it’s spring or summer, it will be crazy busy. But if it’s November, it might not be as bad.”

Fishermen will see a much different reservoir. Only the top part of Lowell Island will be visible. The 14 miles of shoreline likely will increase some, Rodrigues said, now that the height of the reservoir was raised from 117 feet to 137 feet.

As 2014 came to a close, only 25 feet or so of the 900-foot launch ramp was covered with water. But when it opens, it will be just the opposite, with 25 feet or so at the top uncovered.

Rodrigues expects fishing to be exceptional. By the time it opens, the lake will have had seven unfished bass spawns. Rodrigues has seen various age classes of bass on his rounds, but he’s also seen smaller blue catfish, offspring of the big blues in the lake.

“Our blue catfish record is 113 pounds (by Steve Oudomsouk), the state record that was caught just before we closed for the dam project,” Rodrigues said.

Chances are the lake bass and state record for blue catfish will fall once San Vicente reopens.

Rodrigues said the lake’s first opening day was June 12, 1949 when Danny’s Fishing Village was out toward the Ramona end of the lake. Like a lot of areas, that will be under water for the lake’s re-opener.